Do Dogs Really Love Us "Unconditionally?" 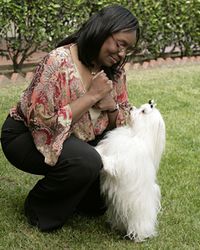 I know we certainly like to say they do, but do they really? First, let’s examine “unconditional love.” It’s defined as the act of loving fully, unabashedly and beyond any limitations. It is a love that knows no bounds, is constant and remains unchanged regardless of the actions or behavior of the recipient. I definitely would say that when dogs love, they do so fully and unabashedly, with all of their being. I think it’s the only way they know how. But will they really give all their love without any conditions? Having witnessed hundreds and hundreds of relationships between people and their dogs, sorry, but my answer would have to be “no.” But I don’t see that as a bad thing at all.

Just like every other living, breathing being, dogs have needs and they will give their loyalty and affection to whomever fulfills those needs. In basic terms, our dogs do love us because we provide for them. This is the same reason that in the wild, dogs will remain with their pack. Instinctively they know their chances of survival are increased if they remain with a group that can provide them with food and protection than going it alone.  What if we stopped feeding our dogs? If dogs really loved us unconditionally, wouldn’t that mean they would continue to give us their undying attention and devotion indefinitely? Only if they were trapped and couldn’t get away. Believe me, if they had an exit, they would leave. Now, I will say this. Dogs would try their hardest to remain with us for as long as they could before leaving and would give us every opportunity to resume our role as provider. However their animalistic will for survival would (or at least should) eventually kick in and they would have to leave to either start fending for themselves or, more likely, find another provider. That doesn’t make them disloyal. That makes them, well, smart. And what about dogs that are abused and mistreated? Will they still give affection to their abusers? Sadly, yes, they will. But again, that is because they usually have no other options. A better experiment would be to provide those dogs with options. Allow them to move freely between two different homes, both which set out food for him, but in one, the humans shout at him, throw things at him, and show him no affection whatsoever, and the other the humans are gentle, provide loving touch and play with him. Where do you think that dog would spend the most time? In fact, I’d put money on that eventually that dog would stop going over to the abusive home entirely, even if they put Filet Mignon in the bowl! So, dogs do have conditions.

The relationships between dogs and humans that I’ve witnessed through the years have not been equal. Some relationships and bonds are much richer, deeper and stronger than others. The closer bonds have been between the people who’ve worked hard to create those connections by spending more quality time with their dogs and being fair, benevolent leaders. Mutual trust is the basis for any quality relationship, and that includes those between dogs and humans. A dog that knows what is expected of him and feels safe will be much more relaxed and willing to give freely. If you have that with your dog, don’t take it for granted. He is choosing to give that to you because you’ve earned it.