What exactly is "socialization?" Should I want it for my dog, and how do I get it? 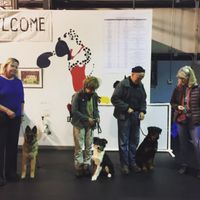 If you read any book on dog behavior and training, you're likely to find an emphasis on socialization. The importance of socialization, particularly early socialization in puppies, is given as high a priority as obedience and manners. But what exactly does socialization mean? Do you know? I ask because a good many of my new clients and students are often not really sure, or have misconceptions about what proper socialization really is. Some think it means allowing your dog to meet, greet and play with other dogs. When they see a dog or puppy that yearns for and is eager to romp, tumble and participate in active play sessions with another dog, then they consider that dog to be "well socialized." Is that true? Maybe. But not necessarily. Social learning is one of the primary objectives of our Puppy Kindergarten and Socialization Program. However when new puppy owners join the class, some are expecting this to mean a "puppy play time" segment, in which all the puppies are let off leash and allowed to have a full out puppy free for all. Nope. Time for some enlightenment and education!

Let's get back to what "socialization" really means. Simply put, it means preparing a dog to feel safe in the world. That entails working diligently to expose your dog to a wide variety of experiences that will help him to feel comfortable, confident and free of fear in a multitude of environments, situations and in the presence of strangers, including all types of people, dogs, and other animals. Dog to dog direct interaction and play can be included in that process, but it doesn't have to be. That really depends on your dog's desire as well as your personal goals for your own dog. Let me explain. Just like humans, dogs are unique creatures. Each dog is an individual, with his/her own personality, desires, likes and dislikes. When it comes to interaction with other dogs, some dogs and puppies seek it and enjoy playing, romping, rolling around, chasing and interacting with other dogs. I call these "dog/dogs." On the other hand, some dogs prefer to sit on the sidelines and watch, perhaps quietly sniff other dogs, while others are just not really interested in other dogs at all. Mind you, they're not fearful, reactive or aggressive either, they're just kind of "meh" when they see another dog and much prefer to interact with people. I refer to dogs like this as "people/dogs." Now, neither of these characteristics should be considered "good" or "bad," or better or worse, however I will say this, when you have a"dog/dog," your job to regain and maintain your dog's attention and focus on you while in the presence of other dogs will be that much more challenging. Your task will be to find ways to make yourself even more desirable than the other dogs, and that's not easy! To the contrary, if your dog is a "people/dog," sure, you might have it a bit easier to maintain attention when other dogs are around, but you will still have to excite and motivate your dog to focus on you in the presence of other distractions as well.

On a personal note, given the particular goals I set for myself and my dog, I do prefer a "people/dog," but when choosing a dog or puppy, there are no guarantees that's what you'll get! I've had many dogs that naturally gravitate toward other dogs, but put in the work to cultivate a stronger connection with him, so that interactions with me will eventually hold greater value than everything else present. Case in point, I was on a competition reality show some years back called "Greatest American Dog" in which a group of people and their dogs were thrust together to compete in a series of mental and physical challenges. Think, "Survivor," but with your dog! Anyway, I took my then 6 year old Maltese Andrew with me on the show, with whom I had developed an amazingly close bond and relationship with. Prior to the show, we had been participating in multiple competitive dog obedience, agility and rally obedience trials for several years. Additionally, Andrew was a working, certified therapy dog who regularly visited a variety of places such as nursing homes, hospitals, schools, shopping malls, etc. and was comfortable and accustomed to meeting all kinds of different people. Well, one of the challenges during the show was to test each dog's sociability. Each dog was taken from its owner and placed in a room with another dog to see how "social" they were. Andrew briefly sniffed the other dog, then immediately went about his business ..... to find me! He had absolutely zero interest in playing with the other dog, but was not fearful or anxious or frantic. He merely calmly started searching for me. Well, much to my surprise, especially since one of the judges was touted as a well regarded "celebrity dog trainer," Andrew received a low score and was deemed by this judge as "lacking social skills!" What??? Despite me explaining that Andrew shared our home with 7 other dogs, therefore seeing another dog was no big deal to him, and that he'd been specifically trained to value and focus on me when in the presence of other dogs, it was all for naught. These particular judges were holding onto the archaic misconception that the desire to meet and play with other dogs was a necessary component of dog socialization. Despite that, Andrew and I went on to win runners-up on the show (we should have won, but I digress!!_ ;)

So, now that we know what socialization is, how do you go about getting it:

1. Expose, expose, expose! Introduce and acclimate your dog/puppy to a variety of different environments. After the puppy has received all the initial immunizations (for us that includes two of the puppy distemper/parvo boosters, the bordetella/kennel cough shot, and if over 6 months of age, the rabies vaccination), take him/her literally everywhere you can! While there, let your puppy take everything in, then gradually ask him for behaviors he knows well and reward him for complying and focusing on you. Take him back to these places repeatedly, allowing him time to become fully comfortable in each place. How much exposure does your puppy/dog need? LOTS! A good place to start is to do a Google search for "Puppy's Rule of 12's," or "Puppy's Rule of 7's." These are comprehensive lists of every possible thing to consider introducing your puppy to as early as possible. You will be hard pressed to be able to complete everything on those lists, but at least give it the good old college try!

2. Introduce your dog to a variety of different people: tall people, short people, men, women, children of all ages, sizes, ethnicities, and when I say introduce, let me be clear. I mean exactly that, i-n-t-r-o-d-u-c-e! Allow each person to slowly approach your puppy, and/or allow your puppy to approach them, and IF your puppy seems receptive and expresses an interest in the person, allow the new "friend" to offer your puppy a treat. IF the puppy seeks out further interaction, allow the person to get even closer, and then progress to gently petting your puppy. IF the puppy is comfortable and accepting of that, then you can advance and prolong the interaction. Now that's a lot of "IFS!" Point is, let the puppy make the choice whether to visit and be petted or not. If the puppy seems to avoid or not like it, don't be disappointed. That's okay, for now. Just have the stranger drop the treat and then give the puppy space, allowing the puppy to eat it if she so chooses. The puppy might just need more time to get used to strangers being around, and learn to associate them with good things. Never force interaction! There's this thing some trainers still do in puppy classes called "pass the puppy," in which all the puppy owners sit in a circle and proceed to pass their puppy to the person sitting next to them, allowing them to hold, fondle, and basically force themselves on the puppy whether the puppy likes it or not. I hate this. Now, granted, many puppies are not bothered and absolutely love this opportunity to get loved on and plant puppy licks and kisses all over strangers! But what about the puppy that doesn't? Remember when you were a child and you had one relative who, for whatever reason, you avoided contact with? You probably dreaded going over to their house because when it was time to leave, your parents always made you "give Auntie such and such a big hug!" Ugh! The last thing you want to teach a shy or reluctant puppy is to dread being out and around strangers, and that she cannot trust you to keep her safe. Instead, just continue to provide opportunities for puppies to be in the presence of strangers and let them be the ones to initiate and advance the contact and interaction.

3. And this goes for interactions with other dogs as well. If your puppy expresses an interest in interacting/playing with other puppies his own age, size and play style, then sure you can proceed to proper puppy to puppy introductions. I have my own, detailed step by step process for these introductions that we present in our Puppy Kindergarten & Socialization class. First and foremost, great care and caution is taken to match puppies up with appropriate playmates with similar play style, activity level, age, and size. If this isn't available, then interactions are not going to happen. But when they do, and the puppies involved both seem to desire the interaction, then it' okay to proceed provided interactions are only in small groups, are kept short, and include frequent interruptions requiring puppies to periodically check back in with the owners. We teach our puppy owners to watch closely and learn to read their puppy's body language. Interactions are thought out, planned and heavily managed, and all precautions are taken to ensure the experience is overwhelmingly positive for all parties involved. And this is precisely why, sorry to say, taking your puppy to a puppy playtime at one of the big box pet stores or even worse, to a dog park and plopping him in with a bunch of other dogs and owners you've never met before is a risky idea. Sure, things could go great, but they could also go downhill real quick. Remember, one really negative socialization experience can follow your puppy throughout adulthood and derail all your previous socialization efforts.

It is our hope that participation in and completion of our Puppy Kindergarten and Socialization Program, participating puppies will be much more comfortable and have much more confidence and impulse control in the presence of other dogs and people outside their family unit. We strive to help build an even stronger connection between dog and owner, and start him on his way to becoming a well socialized dog!